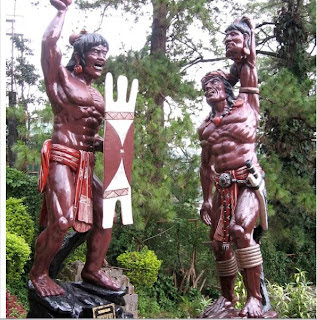 A well known tourist attraction in Baguio City is the Igorot Stairs found right outside Barrio Fiesta, a famous restaurant in the city, specializing in local foods.

The statues themselves are made out of wood, even though they don’t look like being made of such, they have been painted over, and varnished.

The statues, wood sculptures, or wood carvings, depict the larger than life people known as the Igorot, the native inhabitants of Baguio. The statues are larger than life since they are mostly quite tall, taller than a real Igorot could ever hope to become. Each statue depicts one of the professions that an Igorot may have held in their tribe. From Headhunter to just being an Igorot woman. But today not all of the sculpture on sitting on the steps are those of Igorots, today there are also those of famous Philippine political figures, such as past presidents, and the occasional her, there are also sculpture of sleeping guards and some animals.

The balance found in the sculptures can be seen obviously in the way that each sculpture has complete body parts. The material used being wood is perfect for the setting in which the sculptures are placed, which is in a city filled with trees.

Now, specifically the headhunters or more commonly known as warriors, which have been situated next to each other on the steps, are depicted looking happy, or rather victorious. One holding a shield most commonly seen being in the possession of a moro warrior, the other holding up the head of a defeated enemy. Even though realistically, none of these two exist today, their memory is kept alive by the two sculptures.

The colors used to color the statues, are true to the colors of the sculpted figures in real life. The sculptures were made in a way just to probable entertain and inform viewers of how the Igorots lived their daily lives. As for the other statues, they must have been carved just for entertainment purposes, and to keep the stairs as being able to adapt or evolve, in order for the attractions not to stagnate. The sculptures themselves, even though they do not appear perfectly human, they are just physical representations of the reality, they were not made to depict a certain person, rather they were perfectly made to depict a people.

The sculptures themselves seem more real compared to the Igorots that are seen wearing jackets who pose for pictures for money.